The idea for a musical version of the Sudoku puzzle was conceived several years ago when Sudoku was just becoming popular in the UK. I was looking to create a new puzzle for my company newsletter The Bell (I’m Managing Director of the Music Publisher Stainer & Bell), and designed my first grid with musical symbols. However, I decided not to use it at the time and only resurrected the idea in 2007, when we included one as a prize puzzle in the Summer Edition of the newsletter. The response was so great, that I just had to put together a small book of puzzles for publication. Musidoku: The Musical Sudoku Opus 1 was published in August 2007 and the rest, as they say, is history. 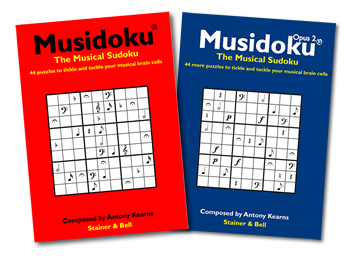 The two little books have quickly become bestsellers, selling in tens of thousands around the world. They have both proved especially popular as ‘stocking-fillers’ for musicians and can be found on the shop counters of music stores and concert hall giftshops worldwide as well as in the catalogues of several musical gift websites and stockists. Both books have also now been sub-published in Japan by Ongaku no tomo sha corp.